So I think I touched briefly on the fact we also have some cows on the property. This came about after our trip to the goat ladies house and saw her two cows. She told us outright that they are by far the most profitable animals to have on the farm as you buy them young at $500 and raise them up to a year, and then either sell the same cow for around $2000 or send to slaughter and sell the meat. She had told us that maintenance was low as they grass feed their cows or ‘pasture raise’ as some people say. Meaning no grain is fed to ‘fatten them up’ also the grain causes marbling (the fat streaks you see through a juicy steak) Something, looking at my waistline, I could do without. The closer on the deal was she gave us two steaks to try and they were absolutely delicious. We were sold.

Initially we were to buy two cows from our neighbour. However the logistics wern’t great as the mothers would be so close by they would end up breaking through the fences. So we actually ended up buying two steers (Male neutered Bulls) from our pet sitter. This is the day they arrived: 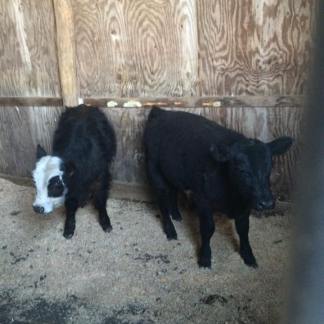 So the initial costs are the water trough ($70) salt block ($6), and loose magnesium minerals as they were eating so much new lush grass ($10).  Then we left them too it. A few weeks later the flies started to become a nuisance, so we also invested in a back rubber ($20) faceflaps ($15) and Pour on Backrubber solution ($20) This they walk under and the solution wipes on them (Permethrin I believe?) which repels the flies, tick, and fleas.

A few lessons we’ve learnt along the way. Cows are way worse then goats for escaping!!!

So much to our surprise we get a phone call from the neighbour one day (The one who also has cows) to inform us that one of our cows was in his heard. As we walked up and down the fence line there was no obvious way the cow had escaped but we patched up a few bits, ushered him back and that was that, until he was out again the next day. So we added more fencing, then again the next day, this was getting silly. Fortunately our neighbour found it amusing and quite amazing that his herd had simply accepted them! Then one morning I was walking down the fence line with yet more patch fencing and I must have startled the cow with the black face as right in front of my eyes he leapt through a 1ft gap between two strands of barbed wire. Whoosh, just gone, this HUGE animal simply squeezed through. Someone once said to me after that they cows are like mice, if their head get through the body will follow! This was a prime example. So we hammered in more t-posts and more patch work and seemed to be ok for a few months.

We also ended up cutting their field as we kind of lost them it had gotten so tall. We were led to believe they would destroy our field, chew right down to mud! But the boys probably spent so much time at our neighbours they hadn’t been mowing our field. But it seems after we cut it they were much happier. So new lesson, cows don’t actually like long grass.

So here we are the boys are now around 8months old. They escaped again two nights ago to go play with the neighbours young cows, which was amusing, but has really been a challenge to keep them in. It is our winter project to put in a better fence down that side of the field. For now they are happy and safe, they are confident with us and always come to the grain bucket. They are fertilising the soil and finally keeping the grass short!